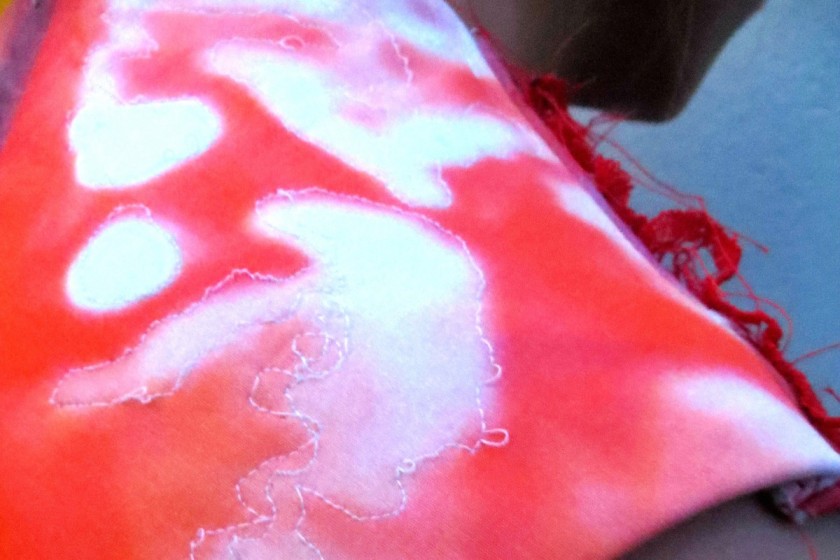 Timmy Gibbons is a student from Belfast, who is about to start Foundation Art and Design in Central Saint Martins, London in September. The work shown is from his A-Level Coursework.

I have always been interested in the performing arts, having attended drama classes and been acting from a young age. But more importantly, I have always had a fascination with the Circus – the performers, the costumes and everything about it. I remember going to the local Tom Duffy’s Circus when I was very young and being mesmerised by the atmosphere and production. More recently, I have attended the more modern and advanced Cirque du Soleil productions, Quidam and La Nouba. The stages, atmosphere and the characters provided inspiration for me, and this is one of my reasons for choosing the circus as my theme. I would also say that Tod Browning’s 1932 film ‘Freaks’, a film which I have been a fan of for many years, provided some visual inspiration for my project. I stepped out of my comfort zone and experimented with film and moving image, in particular with fashion film. I chose to look at SHOWstudio, the self-proclaimed ‘home of fashion film’. I have been interested in, and inspired by the work of SHOWstudio and its director, photographer Nick Knight for a long time – especially his collaboration with Lady Gaga in the creation of the interlude videos for her Monster Ball world tour. Knight’s work has revolutionised fashion in a time when we were becoming complacent with it, looking at repetitive designs and looks on the catwalks year after year.

I began my artistic process with photo editing, as many of SHOWstudio’s other films are edited with filters and strange effects. I used an app called Glitché to achieve the effects –  Nick Knight actually used the app to shoot a recent campaign for the brand Diesel in 2014. I also found inspiration in SHOWstudio’s project ‘Frieze’ done for i-D magazine in 2006. The original is described as, “A blur of colour, reflection and frantic animation” and reminded me of the circus and funfair-like atmosphere. I created a collage of the images I took there and layered them and changed the opacity. 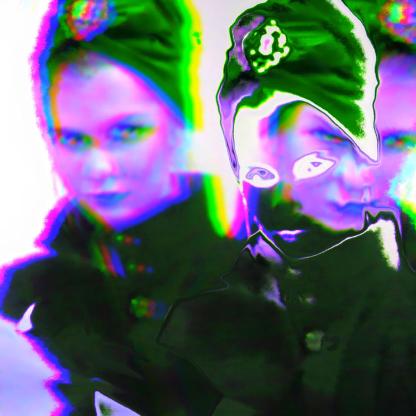 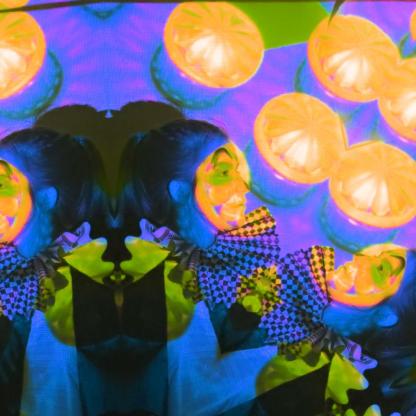 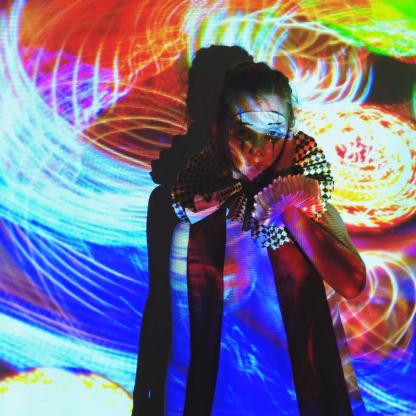 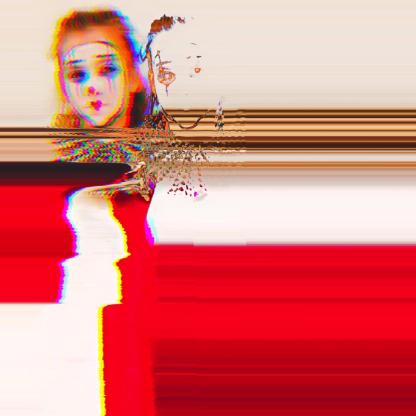 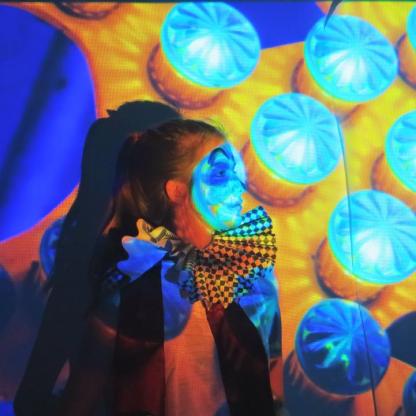 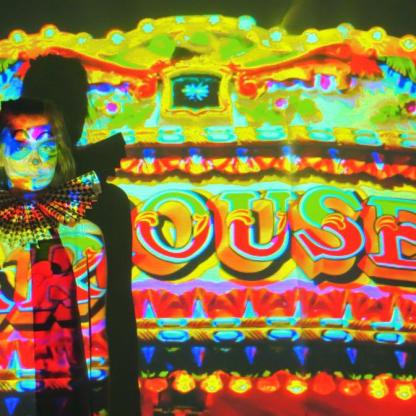 My final outcome was a fashion film with scenes featuring two characters – a fortune teller and a clown. The dress design for the clown was inspired by a circus tent. I drew on the structures of Manish Arora for inspiration – the back of the dress was to be much more irregular like Aroras’ blue structure. I used raw silk as the material for my dress, because, not only was it a beautiful material, but, the rough texture reminded me of the outside of a circus tent. I hand sewed on some beads and accessorised the dress with a wrist ruffle made from ribbon and a similar neckpiece made from paper as the ruffle is, to me, a staple part of a clown’s costume. 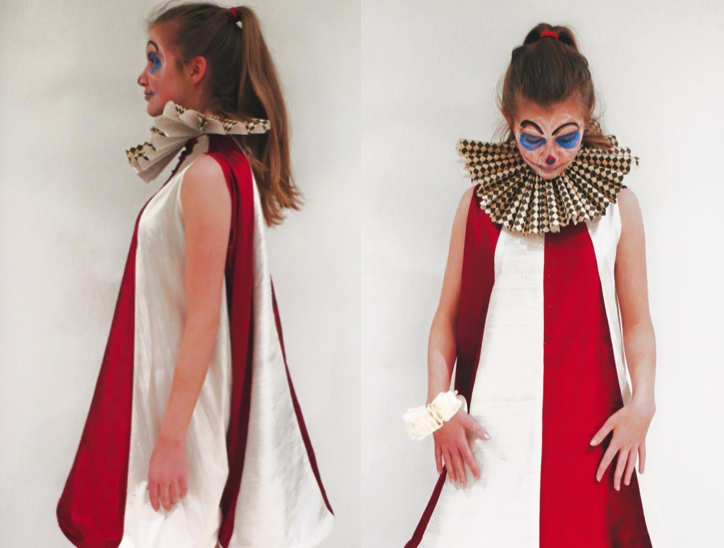 “The Complexity and Fragility of the Human Mind” 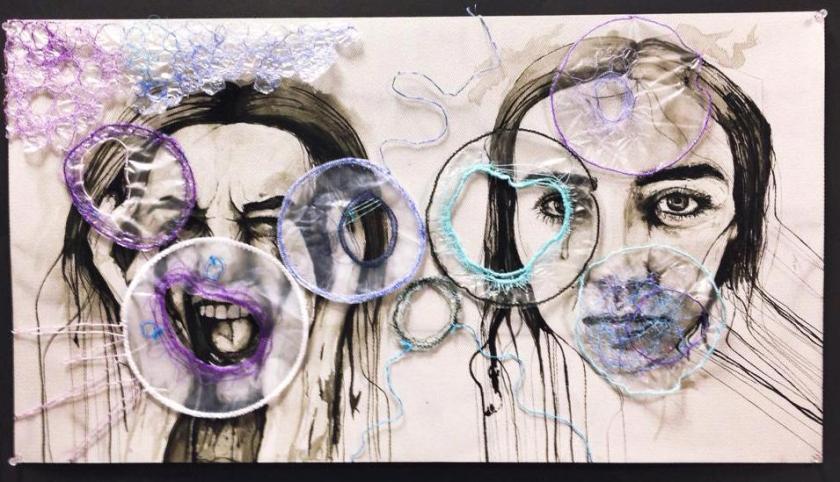 My set theme was based on the brief, “Simple and/or Complex”. What first struck me on reading these was that the human mind is both of these things, a paradox. Despite being the most complex organism / piece of machinery in existence, its balance can be fractured so easily, through mental illness and physical illness, among other things. For this reason, I titled my magnum opus, “The Complexity and Fragility of the Human Mind”. Having a history of mental illness and addiction running in my family, the project helped me to channel this affliction and put it in to what I love most, my art, in a sort of artistic exorcism of personal demons. Not only was it a personal experience, but over the last number of years I have seen many close friends suffer at the hands of illnesses like these. By choosing this as my theme I knew that I would be dedicating this project to those people, drawing on their struggles as well as my own to inspire the project. The final piece was the first time I had tried something so large scale outside the box of fashion / costume design. 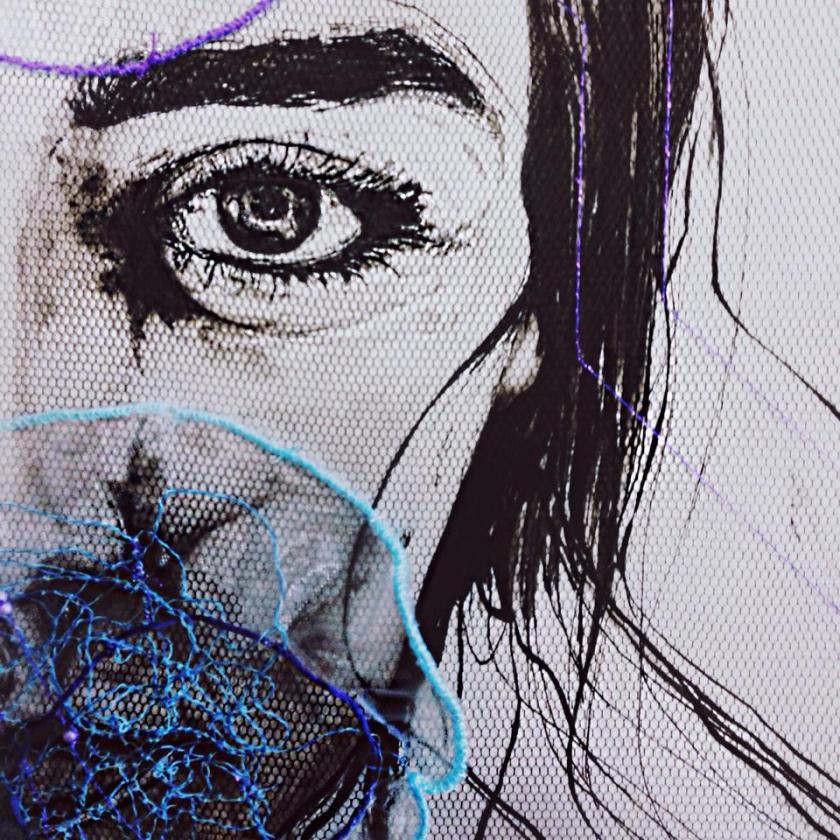 I started on a large canvas doing a pencil drawing of two faces of the same girl, the left one expressing much more pain and the right with more of a misery / sorrow to it, with a single teardrop rolling down her face. I then went over this in black indian ink, a pen and watercolour to create something inspired by the dark yet emotive work of Agnes Cecile. The two girls look like they have been taken out of a drowned world, a nightmare of sorts, which was what I was trying to depict. Onto this I attached a black netting. The idea behind this was to do with how mental illness can leave you feeling alone, like you have been jailed and the sentence has yet to be determined, kept behind the bars in your own mind. 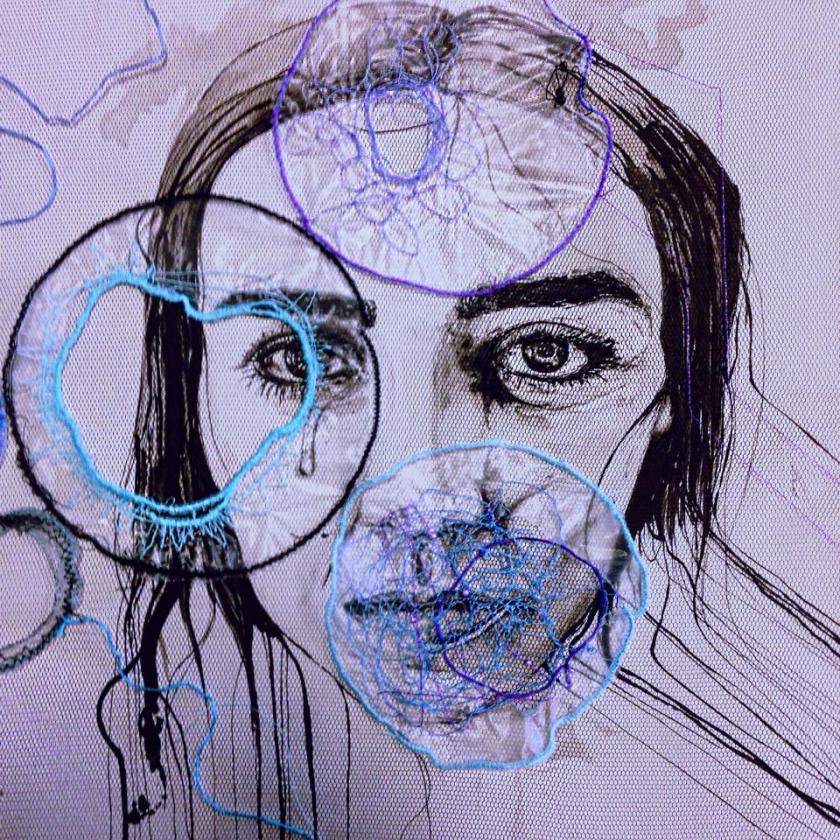 On to this was my favourite part, the embroidered cells. Inspired by the work of Leisa Rich these were created to look like neurones and as the outermost layer of the piece, I wanted them to give a sort of biological context to what was going on – these represent the actual anatomical, physical organ that is the brain. underneath these are the images of the distressed girl, trapped in her own jail ‘cell’, with the idea being she is trapped in her own mind. The emotive faces illustrate her intense suffering within this fragile mind. I feel like this work was definitely the best that i have ever produced, not just because of the quality of it, but because of the story behind it. 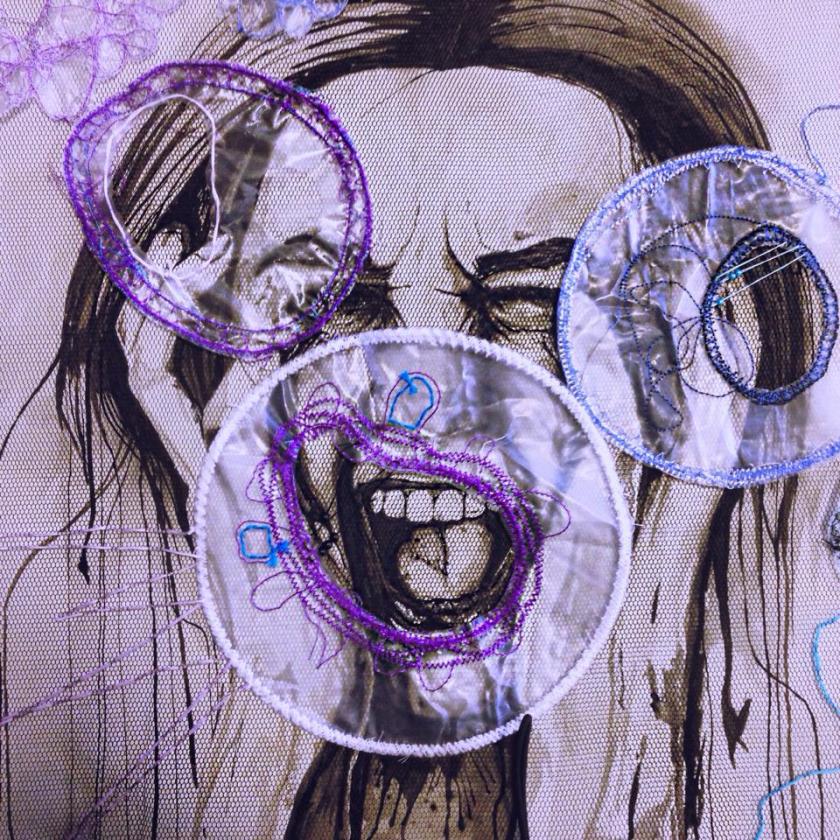 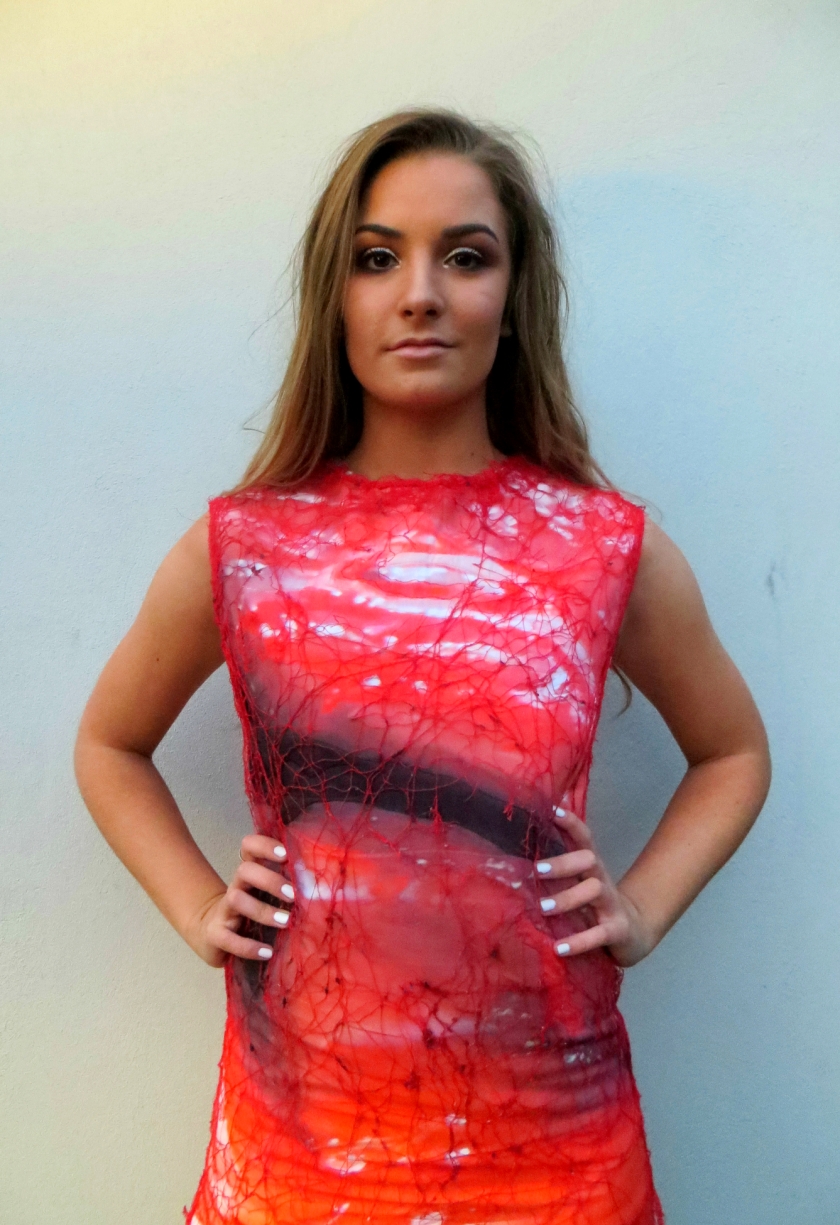 Well, the final finished piece came out from a number of different ideas. When I begin a project, even before I start sketches or anything, I like to have an intense session of brainstorming images and artists and anything that I can relate to my project. These sessions usually set me behind a week behind everyone else in the class, but by the conclusion of the project it always seems to have been the best thing to do.

I looked at the work of French designer Jean Paul Gaultier, in particular a few pieces he did based on the human anatomy (a jumpsuit and bustier made to look like muscles and also a black jewelled corset modelled on the structure of a skeleton) and Franc Fernandez’s iconic meat dress, designed for and worn by Lady Gaga at the VMA Music Awards in 2010.

During my textile experimentation for the project I came across an amazing material, water soluble stablizer, which can be sewn over and then washed under water, leaving only the sewing part. I used this to create a sewn structure based on the veins and arteries which make up the cardiovascular system. During the experimentation I also became interested in using fabric printing techniques and I used a number of photographs which I had taken of animal offal to make small samples. For the final outcome, I complied both of these elements in the sculptural dress. I made the pattern myself, made exactly to fit the model. It was made up of 4 different layers, the outer netting of the veins, the printed cotton, a layer of thick interlining fabric and then on the inside another layer of cotton. When embroidered on this gave a great effect, raising up certain areas and a creating an interesting texture on what would otherwise have been a cotton dress with an animal liver printed on to it! The netting was done last as I had to do what I had done for my experiment, but on a much larger scale. The vein-like structure was then hand sewn onto the front of the dress. 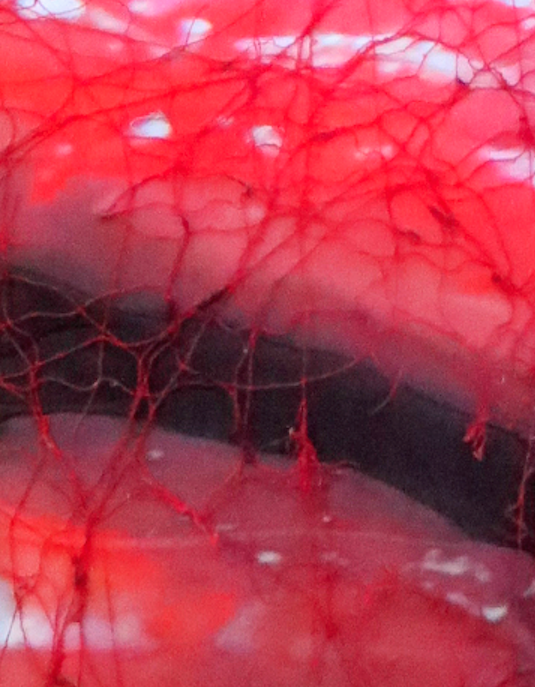 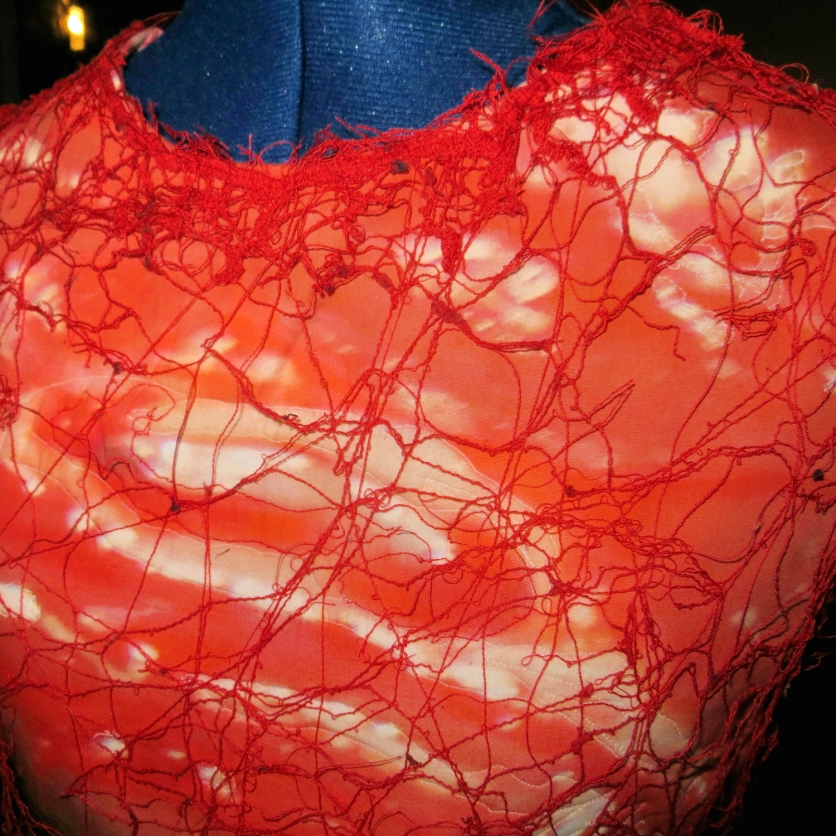 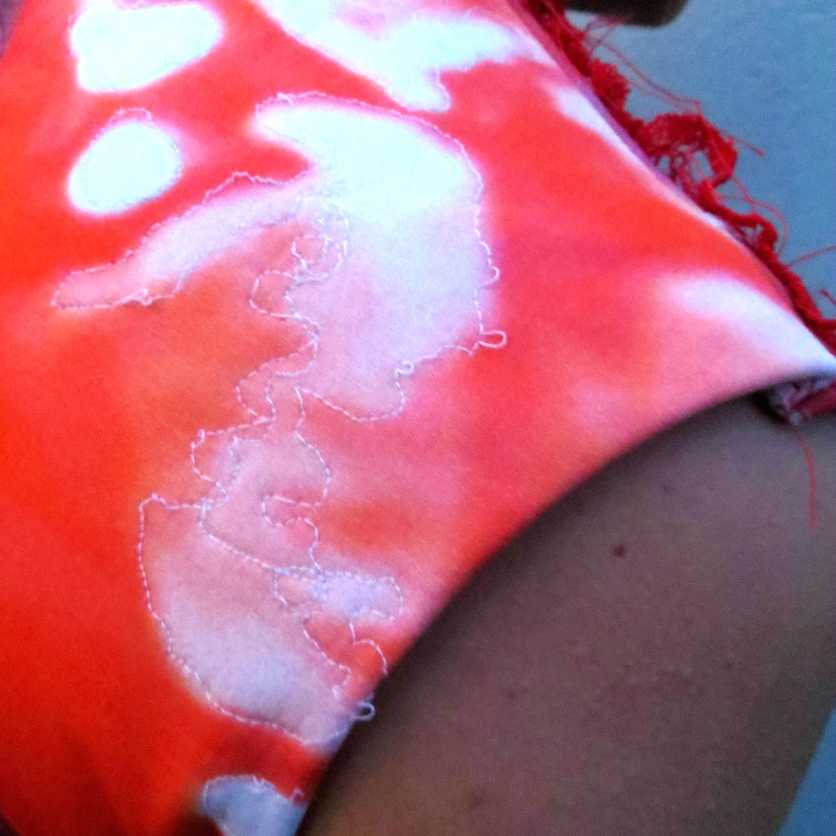 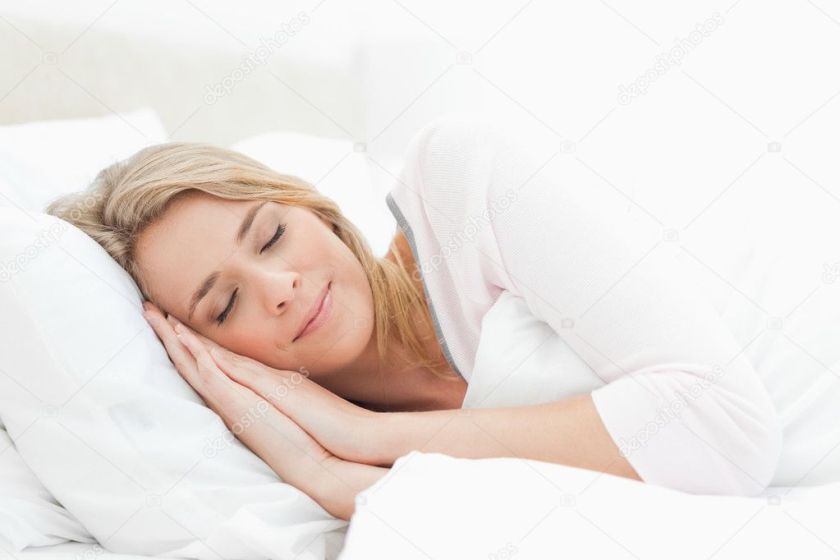 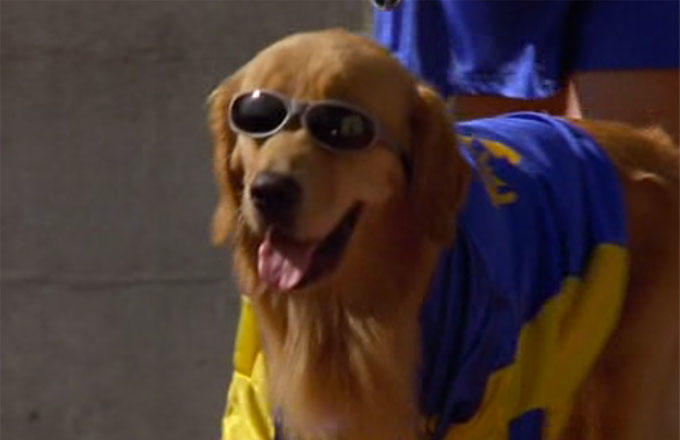 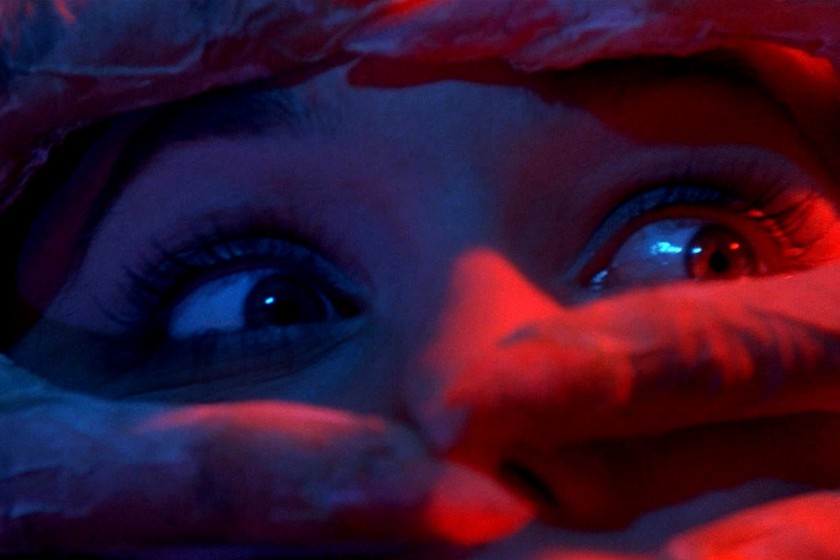